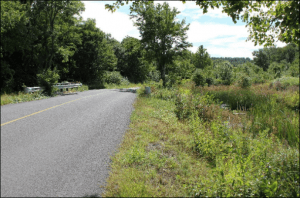 It is curious that we can’t resist attaching human connections to simple points of the landscape, usually doleful ones.  The Bermuda triangle and innumerable reportedly haunted houses come to mind.   My childhood town of New Milford features the sad site and legend of young lovers’ demise dubbed “Lovers Leap”.  And in New Hartford, half a mile down the Hollow we have the Mud Bridge.  The bridge spans the outflow of a state-owned swamp to the north and a wet meadow to the south.  Quite a lovely spot for herons, turtles, and wet loving wildflowers.  With an unobstructed view and no houses for a quarter-mile in each direction, it is a favorite spot for couples to indulge in nocturnal gymnastics.  Sal and I canvas the area on our walks picking up litter with our clawed pickup sticks.  By unspoken agreement, we mind our footfalls carefully at the bridge.

A bit ago, a near neighbor on a walk flagged down a town vehicle to complain that someone exposed himself to her at or near the bridge.  At first, it seemed like a promising event.  Perhaps we have finally attained our very own badge of distinction:  The Maple Hollow Flasher!   As it turned out, the details were more equivocal and disappointing.  Whether the episode was reported to the local gendarmes is uncertain.

Which leads me to my very own tale.  When I initially began delivering mousies removed from our basement, I defaulted to the Mud Bridge.  It was convenient being only a half-mile from the house.  I subsequently learned that it was far too close to defeat the rodent homing instinct.  I gradually realized this when I glimpsed a white foot mouse scampering up the road ahead of me.  But that was a later development.

During one of my first deliveries, a deranged creature, upon release, ran up my pant leg.  Not on the outside of my trouser leg or even the inside, but up my leg.  It is difficult to describe the curious sensation of those prickly little nails as they worked their way up my leg.  I did some serious slapping to dislodge him but to no effect!  The brute scaled my leg relentlessly.  Not to be indelicate, but soon he neared regions that I’d rather not have nibbled.  I really had no choice.  I dropped my pants and wailed away at him.  At that point, a car passed by!  I hastily rearranged my garments and I assumed that the mighty mite had departed.

I was seized by a sinking feeling.  The popular newspapers publish the local police blotters which I peruse with some interest.  It’s always a pleasant pastime to reflect on the neighbors’ misdemeanors.  Occasionally, they highlight an amusing story.  I could almost see the headline:  “New Hartford Man Cited for Indecent Exposure Claims He was Accosted by a Mouse.” Or nearly as bad: “Local Flasher Apprehended”.

As it turned out, nothing came of it.  Either the driver was unawares or simply shrugged it off as more Mud Bridge antics.  Thankfully, I was not forced to decide if I was to go into hiding or disguise myself with a different hat.

Postscript:  the rodent was not gone but merely lurking.  Halfway into Torrington, I had to repeat the maneuver while driving one-handed.  This was not so easy as one might assume particularly while driving through midday traffic.  My furry passenger departed in some haste and climbed into the dashboard.  He died in his new quarters.  This became an interesting if putrid state of affairs in high summer.

I have high hopes that the bridge will ultimately morph into a destination rivaling Ski Sundown, our local ski resort.  In the meantime, I recommend that locals might quicken their pace near the span or stop and linger to take in the scenery and, depending on predilections, savor the happenstances as they might occur.

We’re Shannon and Brian Betts, the parents behind Parent Samurai.