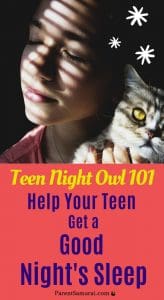 When I heard the stirring between 2 -3 AM night after night, I realized it was my 13-year-old son wide awake and flailing about.  The insomnia seemed to come out of nowhere. Suddenly, we had a host of related problems on our hands. He began falling asleep in science class. His grades started to slip. He angered more easily. Little annoyances were suddenly a very big deal.

How did I help my teenager get the recommended 9 ½ hours sleep?  The most effective long-term approach to helping a teenager with chronic insomnia is to modify daily routines.  First, increase the level of physical activity throughout the day. Next, reduce the negative effects of screens and technology on sleep. Lastly, at bedtime, introduce relaxation methods to calm your teenager’s body and mind.

Normally a good sleeper, our son’s new insomnia turned our household routine upside-down and we had to take action. My research turned up a boatload of advice and I sifted through source after source to find effective ways to help him get a good night’s sleep without introducing sleep medication.

The common tips to getting a teen to sleep are deceptively simple. But do they really work?

At first, it was an uphill battle against biology. We learned that several growth stage changes were likely contributing to his sudden lack of sleep. A teen’s body clock signals him to fall asleep later at night and wake up later in the morning, putting him at odds with most early school schedules. An adolescent’s brain can delay making melatonin, a hormone crucial to kicking off the sleep cycle, until after 11:00 pm.  This means that a teen’s brain winds down differently from adults and younger kids. The National Sleep Foundation chalks this up to the normal changes during puberty. In the article titled “Sleep Drive and Your Body Clock”, they assert, “Changes to this circadian rhythm occur during adolescence when most teens experience a sleep phase delay. This shift in teens’ circadian rhythm causes them to naturally feel alert later at night, making it difficult for them to fall asleep before 11:00 pm.”

An adolescent’s own body clock, coupled with a mind active with worries or stress, can create a teen night owl out of step with the daytime world. 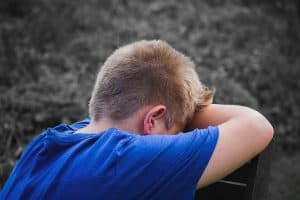 In the absence of enough rest, our son became increasingly frustrated, unfocused and erratic.  Much like a torture victim, the lack of sleep made him desperate for a change. And no wonder. He was becoming the poster boy for the National Academy of Sleep Medicine warning: “Poor sleep can negatively affect a student’s grades and increase the odds of emotional and behavioral disturbance”. Yikes.

Despite the research, our initial attempts at a self-help resolution of the insomnia were mixed. We spent time outside playing with the dog. We bought relaxation CDs. We cultivated a bedtime ritual of chamomile tea. Over his protests, we offered warm milk. Nothing seemed to work consistently.

We had begun the journey with a determination of avoiding medication but became worn down over time by a host of escalating problems brought on by the sleeplessness. So there we were, at the doctor’s office, desperate ourselves and on the verge of medicating our son. The doctor, thankfully, outlined a more moderate approach. A new exercise program and changes in routine in lieu of a prescription. We agreed, with trepidation. Would it work?

It was a miracle. With as little as 30-60 minutes of sustained exercise a day, his mood was measurably better.  He was less argumentative. He began sleeping through the night on a semi-regular basis. While daily exercise is widely known to be effective in decreasing anxiety and depressive feelings, we had no idea that it would work so well for insomnia.

The most obvious opportunity for daily exercise was for him to join an athletic team at school. Our problem? Our son had zero interest in team sports. So instead, we resorted to a less structured approach to get the recommended time per day.  The backyard and local park were perfect places to kick around a soccer ball or shoot hoops with friends. We entered fun-themed 5k (or less) road races which encouraged a level of preparation and training several times a week.   To keep it light, we downplayed the competition and focused on the fun aspects of being out of the house and moving.  One of the unexpected surprises was that he met up with friends who were also running in these events.

Walking our dog presented other opportunities for physical activity.  Irresistibly, our dog would bring us the leash – no one, especially our warm-hearted son, could 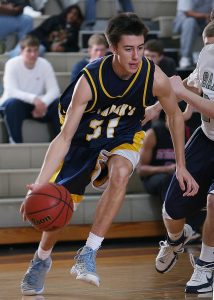 turn down that entreaty. With a little imagination, we found activities where our son felt good, got healthy and had fun.   Ratcheting up our son’s daily physical activity was the single most effective antidote to insomnia he had experienced throughout an entire year.  Still, even with improvement, there were still some very late nights which prevented him from doing his best. We turned to the rest of the doctor’s suggestions.

Surprise! Screens have been shown to interfere with sleep. First things first. Does your teen have a TV in his room? If you can do it without causing a big showdown with your teen, you need to go remove the TV. Seriously. Do it now. I’ll wait. A caveat: it’s often hard to get a television out of a teen’s room once it’s become a staple. The issue magnifies if there is a gaming console attached.   If this is an area that requires negotiation with your teen, it’s understandable. Just do your best to keep pushing through to an agreement to get that thing outta’ there.  In our case, we didn’t have a TV to remove. Other electronic devices posed a similar challenge.  See Also: How to Manage My Teen’s Online Access: Setting a Media Curfew 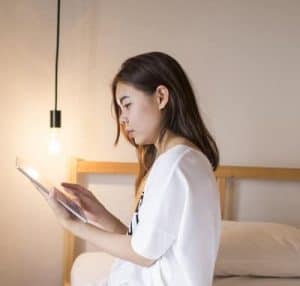 It’s impossible to monitor what or when they are watching. It’s impossible to monitor how long they’re watching. What’s the harm? Turns out, there’s a range of negative effects associated with in-bedroom televisions. For example, “The Association of Television Viewing During Childhood With Poor Educational Achievement” published in Archives of Pediatric and Adolescent Medicine in 2005 found that kids with televisions in their room scored significantly lower on all academic tests.    Studies like this one also suggest that having a TV in a teen’s room can interfere with sleep.

Though we should have known, there was no early “Aha!” moment for us connecting lack of sleep with overstimulation by screens. We tightened up our rules around all screens in order to give him time to wind down after playing a video game or watching a movie before lights out. Though you won’t be popular for this decision, changing the rules around the use of electronics can have a big effect on the quality of sleep in your house.

For example, we set a media curfew which makes phones and other electronics off-limits after 9:00 PM.  We’ve also asked our teens to use devices only in common living areas of our home.  Some families use the honor system to make this work. Alternatively, you could set up a schedule in your wireless router to disable wifi to devices between your teen’s wind-down and wake up time, say 9 PM to 6 AM.  In most routers, this can be done by device or for the entire wireless network. Other families are looking for a simple solution to manage all devices on a router with a phone app. This one, called Circle Disney, seems easy to install and manage.  We also established a couple of other rules:

To complement the exercise and screen management, we brought in a few easy relaxation activities.

Should I consult my doctor?

The short answer is – YES.  We found our pediatrician to have helpful advice and additional options for us to explore.  Also, if the insomnia problem reaches beyond the scope of changing a few daily behaviors, you may want to investigate further.

Does your teen come home on time to get enough rest?  See:  How Late Should I Let My Teen Stay Out: Setting a Curfew

See also: Are You a Parent Samurai?

link to What is a ‘Bruh Moment’ & Other Teen Slang That’s Worth Knowing: A Parent’s Guide

by Samurai Mom Feeling lost and confused about the stream of insider expressions coming from your kid? You’re not alone. Teen slang is notoriously slippery. By design, quickly...

Continue Reading
link to How Can You Keep Your Teen Focused While Learning at Home? 10 Ways to Engage Your Middle Schooler Longer in Academic Work